Founded over 60 years ago in 1954, Gleaner supply bulk fuels from an extensive network of depots across Scotland. Our head office in Elgin, Moray, oversees our operational activities and supports our staff members on a daily basis.

The name ‘Gleaner’ has its origins in the old fishing and agricultural phrase ‘to glean’, as in ‘to glean from the land, to glean from the sea’. The company was initially created to serve these industries. Today however, Gleaner serves a wide array of commercial industries as well as serving the domestic heating market and runs a network of filling stations.

Our Partnership with Shell

Before becoming an independent fuel distributor, Gleaner operated as a ‘Shell Distributor’, selling and delivering Shell bulk fuels across Scotland. Today Gleaner Oils are an approved distributor of Shell Lubricants and Greases, carrying on the partnership which has existed for over 50 years.

Since our formation in 1954, Gleaner has remained a family owned company being handed down through three generations of the Young family. Today Gleaner is owned by Jane and Stephen Scott. As the granddaughter of the company’s founder, Jane together with her husband Stephen are committed to providing a quality service and remaining a local commodity for Gleaner customers, continuing the high level of customer service Gleaner has provided for over 65 Years’. 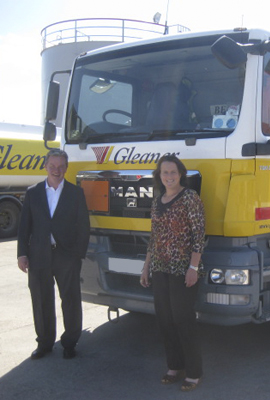